By: Annelies Kusters and Jemina Napier

This blogpost was originally posted on the Mobile Deaf website on Friday 14th September 2018. See: http://mobiledeaf.org.uk/on-audio/

What do people think when they see a signing person on stage, and hear a simultaneous interpretation?

On Thursday 6 September, I gave a keynote presentation at BAAL titled “Sign multilingual and translingual practices and ideologies”. It was the first presentation of the conference and a number of people tweeted. One of the tweets read:

I wasn’t using a pre-recorded audio-file from which I was interpreting myself. I am a deaf scholar. I presented in British Sign Language and was interpreted into spoken English by Jemina Napier. This is the typical practice for deaf academics presenting at conferences.

My deaf colleagues, the team of interpreters and I initially laughed at the misunderstanding, and the Tweeter also realised his mistake quickly, writing:

However, rather than just waving it away as the umpteenth ignorant comment about deaf people, another funny anecdote to share with my friends, this also made me think. I am in a pivotal moment in my academic career in that I’m becoming more visible. Did it even occur to the Tweeter that I was deaf, and that me signing my presentation in British Sign Language was not an attempt at being innovative but simply the best option at hand (sic) for me? In other words: why not assume immediately that this signing person on stage in a mainstream conference is most probably deaf? Do people not think that deaf people can be academics who can get invited as keynote presenters in this kind of conferences?

Example two. During one of the breaks at the same BAAL conference, another scholar from another British university approached me. He said he had seen me on the screen: the hall where the keynote happened was full and he was watching the livestream in another room. Apparently he initially thought I was speaking and signing at the same time, and was puzzled about my Australian accent. Only later, he realised that I was working with an interpreter (and if I would have an accent in English, a language I do write but not speak, it would certainly not sound Australian!).

Example three. After another applied linguistics conference where I gave a keynote earlier this year, the TLANG closing event, someone wrote about my keynote presentation “Her keynote was an especially engaging end to the day as it was impressively and seamlessly presented in both sign language and spoken English.“ (https://channelviewpublications.wordpress.com/2018/04/04/communication-in-the-multilingual-city-the-tlang-conference/)

LINCS is glad to announce that this academic year (2018-19), a Language Tandem app will be running after the huge success and very positive feedback received last year. This app is intended to get Heriot-Watt students (and staff, if they so wish) in touch so that they can practice their languages.

Language Tandem App – what is it?

How does it work? 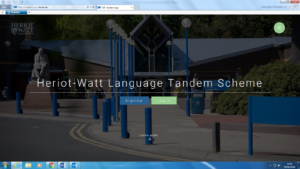 To sign up you’ll need your HWU credentials, and once you’re in, you’ll need to create a profile. We recommend that you create a profile that represents who you are. Don’t be shy, let others know what your interests are, it could be anything from football to manga. Once you find someone that matches your profile, say hi to them, get a conversation started and in no time you could be meeting socially to practice your foreign language.

“I found the app very useful, I was able to speak with my match in the foreign language I am studying (Spanish) and they spoke to me in English to improve, giving each other feedback as we went along.”

The idea is that meet regularly and practice English for, say, 30 minutes, and another language (there are many to choose from!) for another 30 minutes. This is a brilliant opportunity for people who need an extra little bit of conversation practice, and for this reason, we’ve created a platform where you’re in control, you decide who you want to meet up with, and you decide what languages you want to practice!