On 12th and 13th January 2017, the kick-off meeting for the DESIGNs project (Deaf Employment for Sign Language Users in the EU) took place in Dublin, Ireland.

The DESIGNS project is funded through the current European Commission’s ERASMUS+ Key Action 2 Strategic Partnerships, and brings together 7 partners from 4 EU countries who are renowned experts in the fields of Deaf Studies research, education and training, employment, sign language interpreting and Deaf community advocacy.

The project is promoted by the Interesource Group Ireland, and the partners are the Centre for Deaf Studies at Trinity College Dublin (Ireland), the Department of Languages & Intercultural Studies at Heriot-Watt University (UK), the Deaf Studies Group at the Humboldt University of Berlin (Germany), the European Union of the Deaf and the European Forum of Sign Language Interpreters (Belgium) and AHEAD – Association for Higher Education, Access and Disability (Ireland).

There is a direct link between early education, attainment of professional and/or educational qualifications, advancement into the labour market and social inclusion. Apart from financial autonomy, work and paid employment serves to develop a sense of belonging with positive mental health benefits and identification with the wider community (National Disability Authority, 2005). However, Deaf people continue to face barriers in education, employment and access to services such in healthcare, legal and social welfare settings.

In a report on poverty in the Deaf community, Conama and Grehan (2001) state that Deaf people experience higher rates of poverty, social exclusion and employment. Factors such leaving school with no examination nor qualifications, inadequate support for the use of sign language has resulted in a worrying picture and 80% of Deaf adults have literacy problems compared to 25% of the population as a whole.

Research and data on unemployment is under reported and inaccurate. “Deafness and hearing loss” is often used to report data, and sign language users who are Deaf is under-researched. The World Federation of the Deaf also reports that figures on (un)employment are inaccurate and difficult to quantify (Hauland & Allen, 2009).

The overall aim of the project is to create research-driven, evidence-based VET and CPD training resources and exchange best practices across Europe to facilitate greater participation of Deaf sign language users in employment.

This will be achieved by developing the following work package products:

The kick off meeting in Dublin involved the research consortium getting together to discuss and plan project milestones and tasks. In addition, a ‘townhall’ meeting was held in cooperation with the Irish Deaf Society at Deaf Village Ireland, to launch the project to local Deaf community members by giving an overview of various issues related to deaf people and employment and a description of the project. The event was live streamed through the Irish Deaf Society’s Facebook page, and the video can still be seen with presentations interpreted between English and International Sign.

The research input from Heriot-Watt University is being led by Professor Jemina Napier and a deaf research assistant will join the team at a later date. A newly arrived deaf PhD student – Mette Sommer –  will be conducting research on the lived experiences of deaf people at work – so her research will also complement the DESIGNS project.

A community information event will be hosted at Heriot-Watt University sometime in the coming months, so keep an eye out for information about the event and the project. 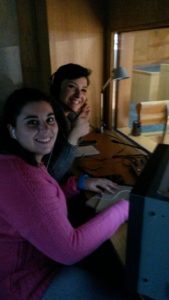 Thanks to a long-standing cooperation with Holyrood, the seat of the Scottish Parliament, we’ve been able to give our 2016-2017 cohort a chance to experience a real professional booth, during an authentic event. Students are organized in small groups and split between the two main interpreting booths overlooking the main debating chamber. They practise live, simultaneous interpreting from interventions from the presiding officers and MSPs, under the supervision of lecturers who are also experienced conference interpreters.

Of course, microphones remain switched off: it’s only practice after all, and students are half-way through their training. But this type of proper situated learning experience, set in a genuine work environment, provides students with a unique chance to test their skills and observe a number of challenges which aren’t always easy to integrate in a classroom setting. 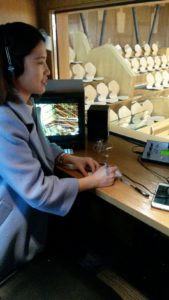 This unique interpreting training experience has been the object of a study by Chouc and Conde, and there are many benefits for students: they are confronted, in the space of 2 ½ hours, with a range of Scottish accents, but also various paces or style of expression. They also become more aware of the type of procedural jargon used in parliamentary business, observing recurring turns of phrases used to present a motion, formally adopt it or to address the various stakeholders. They encounter passionate speeches, arguments, technical terms familiar to MSPs, but which can be challenging for students who don’t use this type of terminology daily. It also puts their awareness of current and local affairs to the test, since the parliament handles a range of matters very much determined by the news, as well as issues that every community faces.

But more than anything, students get a feel for the career they want to embrace: it’s a test of stamina, as they remain in the booths for the full duration of the session (over 2h). It’s also an opportunity to learn how to work in teams, as students all work in pairs or as a trio: they assist each other, discuss solutions and glossary, and gradually adopt the behaviour of professional interpreters, sitting side-by-side, and scribbling the words, acronyms, names or figures their colleagues may need. They also take it in turn to listen to their peers as pure users, thus applying their critical skills to a live performance. This is a crucial step in developing their own self-assessment and monitoring skills.

Ultimately, though, it remains an exciting and inspiring opportunity, and students leave the booths motivated, focused, and better aware of the demands of a professional interpreting assignment. And that takes them one step closer to professional booths in international institutions! 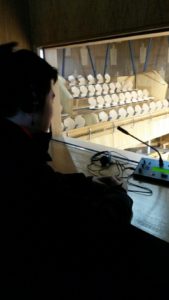 Click here to see a BSL version of the blog, presented by Rosemary Oram.

In two previous LifeinLINCS blog posts in March 2016 and August 2016, we have provided an overview of our Translating the Deaf Self project. The AHRC Translating Cultures research innovation grant for this project has meant that we have been able to carry out a scoping study of an area that has not yet been explored in the literature of Deaf Studies, Interpreting Studies, Applied Sign Linguistics or Applied Social Research. Our research focused on what it is like for Deaf sign language users to be known largely through translation and what the consequences might be for wellbeing.

Our research questions were as follows:

As this project was a new exploration of this concept, it is clear that more research is needed on this topic.

We are in the process of writing up our findings, and will submit them for publications.

So far we have also given several conference presentations as follows:

In collaboration with two Deaf-led production companies, AC2.Com and Mutt & Jeff Pictures, we produced three short films in BSL to encapsulate some of the key themes that had come up in our data. The films are not an attempt to summarise the findings, but to highlight some key issues that our participants discussed, which we can use to generate more conversations about the concept of the ‘Translated Deaf Self’.

We have not yet made the videos public via social media as we are concerned about how people might respond and the potential impact on wellbeing if any content of the videos triggers emotive responses and we cannot be present to talk through those responses. Instead, we have decided to only show the videos when a member of the research team is present to explain the background, contextualise the study and the videos, and is available to talk through responses. But each film has been submitted to the Deaf Fest 2017 Film Festival in the UK, so we hope that they will be shown there.

In September 2016 we hosted an event in collaboration with Action Deafness and the Derby Deaf Club, where we had approximately 75 participants who travelled from all over the country to learn about what we had found in the study, and to participate in a preview of the films. As part of the event, we also had follow up discussion in BSL about how the participants responded to the films and whether they identified with the themes in each film. Showing the films generated a lot of interesting discussion, and has confirmed for us the importance of taking the films around the country to show the British Deaf community.

We plan to apply for further AHRC funding to explore the notion of the Translated Deaf Self in more depth, and hope to continue the partnership with all the people and organisations who were involved in this scoping study. We also plan to apply for AHRC Follow-on Funding for Impact and Engagement in 2017 in order to disseminate the findings and show the videos via a ‘roadshow’.

In wrapping up this project, we would like to acknowledge the contributions of many people and organisations, without whom this project would not have been possible: