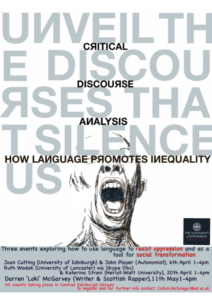 Social inequalities are systemic, deep rooted, and constructed. One of the most powerful ways of constructing and reproducing inequality is through discourse, which is ingrained in everyday communication, perpetuated by the media, established as the norm or as ‘common sense’. A group of Edinburgh University academics, independent researchers and activists decided to run workshops on how language promotes inequality, and they asked me to participate because I had delivered a workshop session for them back in February 2017.

The project, entitled “Critical Discourse Analysis – How Language Promotes Inequality” and led by Dr Callum McGregor and Dr Jim Crowther, received funding from the Global Justice Academy and consisted of three workshops aimed at researchers, practitioners, community workers and activists. The workshops focused on language and power, and how Critical Discourse Analysis can help unveil the power structures that underlie or are promoted by language and discursive strategies. The aim was to show how aspects of CDA can be used to recognise and resist power structures that aim to dominate and oppress. Each workshop ended with a reflection of how this can be done.

The first workshop took place in early April and included inputs by Dr John Player (independent researcher) on Hegemony and Discourse,  Dr Joan Cutting on Engaging with CDA, and by poet and performer Petra Reid, who composed a poem on the day’s topic and discussions and performed it at the end. 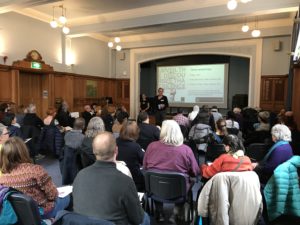 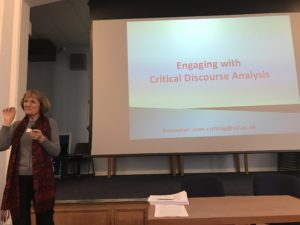 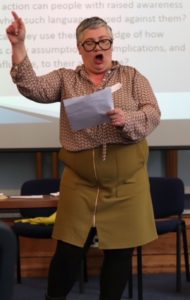 The second workshop took place in early April and included sessions by Dr John Player, by me, and a group discussion in World Café style. I chose not to talk about CDA, as I’m not an expert, but to focus on Membership Categorisation Analysis instead, which is a lesser-used method closely connected to Conversation Analysis. MCA is particularly useful when looking at membership, representation and identity.

There were about 40 participants who took part in all three workshops. Discussions were lively and stimulating. Here’s some of the participants’ feedback:

“The presenters did a fantastic job of explaining and communicating clearly some very complex CDA methods and analytical tools. I also enjoyed the exercises and World Cafe style discussions in the second workshop which I found very useful and edifying. I also liked the emphasis given to the practical application of CDA to real cases, e.g. by using relevant discourse analysis tools for identifying structural inequalities (as they are discursively manifested, constructed and reproduced) and for challenging them by providing/producing alternative, critical discourses.”

“The mixture of audiences for the workshops. More events should be organised where academia, grassroots initiatives, activists, etc, interact and exchange ideas.”

“I enjoyed learning a new approach to CDA from Katerina but also discover the great work some of the participant community groups are doing.”

“I was very intrigued by the direct and practical use and application of CDA in current community projects and activist campaigns. This was something that I had never encountered before. I would thus be very interested in participating in relevant activities and projects whereby the full transformative potential of CDA methods can be fully exploited, so as to challenge social injustice and inequality while concomitantly inspiring change.”

“I have to say, I have found this whole experience quite novel and almost life-changing. Talking to people who are not linguists but who need to understand language and challenge impositions on them in everyday situations, in contexts of homelessness and crisis, has shown me how useful and impactful this approach is.” 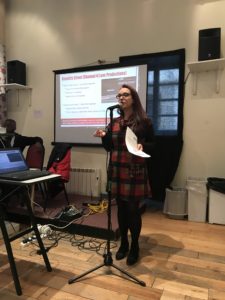 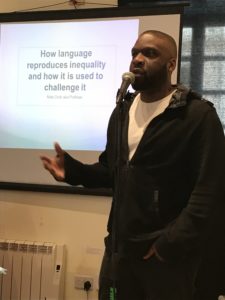 Nike Oruh (Profisee) wrote a blog post after the third workshop, which can be found here: https://medium.com/@profisee/how-language-reproduces-inequality-and-how-it-is-used-to-challenge-it-165f88188431 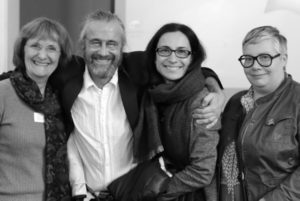 We hope to receive some more funding and continue delivering these workshops!

For more photos from the workshops, please click here