by Nicola Bermingham and Sara Brennan

The posters addressed topics from a wide variety of geographical terrains, from Scots, Gaelic, and British Sign Language here in Scotland to language policy in Germany, France, Belgium, and Portugal. The students employed a range of methodological approaches, including qualitative interviews, surveys, questionnaires, and conversation analysis of audio-visually recorded data. They were also encouraged to produce original research while showing an understanding of existing literature and key theoretical concepts. 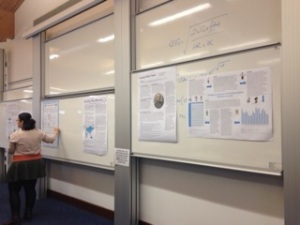 The event was widely publicised and both members of staff and postgraduate research students from LINCS attended. This meant that students experienced the process of a poster session at a real academic conference, since they also presented their posters to the assessors and other staff in LINCS and then fielded questions about their research.

The result? Not just nice food and networking. Many of the students expressed a keen interest in further developing their topics and pursuing more advanced sociolinguistic research.

A selection of posters is now on display outside the interpreting labs in Henry Prais building.

Special thanks to PhD students Nicola Bermingham and Sara Brennan from LINCS for organising a most successful poster session!