My name is Olivia Moran and I’ve just started 4th year at Heriot-Watt.  I study in the LINCS department, on the MA (Hons) International Business Management and Languages degree.  I spent my third year studying in Madrid, at the Universidad Pontificia Comillas ICADE, and I can honestly say that it was the best year of my life.

ICADE has a reputation in Spain for being a prestigious university, and it was very different to any uni I’ve seen in the UK.  As it’s run by the Society of Jesus, the main building has a full size chapel and everything.  The professors were great – if they realised that you wanted to learn, they were super patient and willing to help you in any way they could.  The Spanish kids kept to themselves, but I made some great friends amongst the other Erasmus students.

To me, ICADE was more like being at high school than university: the classes were small, generally no more than 20/25 people, and the students were together throughout their four years there, which meant that they all knew each other well.  At first, I was intimidated by these small classes, but I quickly realised just how useful they would be.  The professors got to know us all very quickly, and we were given lots of opportunities to contribute and answer questions.  This helped my Spanish improve much more than if I had been a in a lecture hall with 200 people.

Erasmus students at ICADE can choose from a wide range of courses within the business school.  They also offer Spanish classes especially for the exchange students, which I found incredibly helpful – I managed to reach C1 level by the end of the year!  On the business side, I chose quite a few marketing modules, as that’s the industry I would like to work in when I graduate.  This was very useful, as I learnt a lot about the Spanish techniques, agencies and regulations, which in some cases differ greatly to those in the UK.   I also had the chance to study some quite unique modules – one of my favourite classes was Spanish Foreign Policy, as I love history and have an interest in politics.  It was also fascinating to see how government stances from 50 years ago are still influencing Spanish trade. 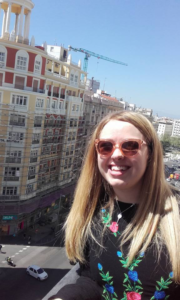 It took me a while to get used to ICADE – there is no real campus, just a main building for the business and law students, so at times I did miss wandering round Heriot-Watt and admiring the loch, but it was a great opportunity to try something different.  It also means that I really appreciate Heriot-Watt’s beautiful campus now!

For me, the scariest part of the exchange was finding accommodation.  But as soon as I saw my flat, I knew it was meant to be.  My room was really bright, spacious and looked out onto a traditional little street.  I shared the flat with four Spanish girls who spoke no English.  I won’t lie, this was incredibly difficult at the beginning.  However, it was absolutely the BEST decision I could have made.  The girls were so friendly and patient, even with my stuttering Spanish.  That gave me the confidence to speak to them more, and now holding a conversation in Spanish doesn’t make me stress out anymore.  Even better, I’m still in touch with all the girls, which means that I can keep working on my conversational Spanish – when I go back to Madrid in October, I’m actually staying with them instead of forking out for a hotel!

I completely fell in love with Madrid during those 10 months.  I’m actually hoping to get a job there when I graduate – or somewhere in Spain at the very least!  There’s so much to do, whether you like art, history, culture or football.  I went to 10 (yes, ten) Atlético games (including Barcelona and Leicester), spent more hours in the Retiro reading books than I could even count, travelled to Portugal, France and the Netherlands and found so many great little bars and cafés along the way. 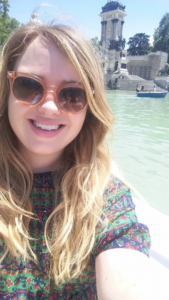 Rowing around the boat lake in the Retiro is a must for anyone who visits. 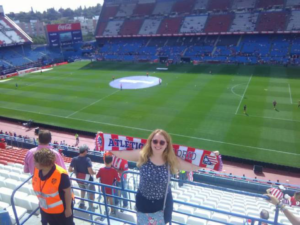 Sadly the Vicente Calderón is no more, but any Spanish football match is going to be good! 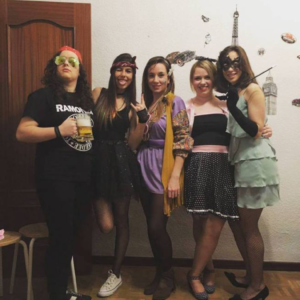 If you have Spanish flatmates, they WILL make you dress up for Carnaval.

You have to make the effort. If you’re willing to speak Spanish, people will welcome you with open arms and make you feel like a part of their community.

Erasmus can be the best year of your life. It was for me!