As Scotland-based Spanish film lovers are well aware, early October marks the arrival of the Edinburgh Spanish Film Festival. The Edinburgh leg of the 2018 edition of the festival took place in the Scottish capital between October 4-13, before moving on to Glasgow until October 20, and including a showing in Stirling on October 7. This cinematic event showcased some of the most interesting, exciting and thought-provoking examples of recent Spanish cinema. Highlights included Handia, shown on opening night and shot mainly in Basque, Hopelessly Devout, a hilarious comedy presented at the festival by José María Conde, head of the Spanish section in LINCS, and the gripping thriller Mist & the Maiden, based on a book by acclaimed writer Lorenzo Silva and for which LINCS lecturer Leyla Navarrete did an outstanding job as an interpreter for the Q&A session after the film.

Once more, the festival was the perfect platform for further collaboration between the University of Edinburgh and Heriot-Watt University. It was also the ideal setting for LINCS volunteer interpreters (María San Juan, Marina González, Eilidh MacLachlan and Carmen Acosta), who were carefully chosen among our current and past cohort of MSc and Honours students, to show their interpreting skills in a high-profile event. 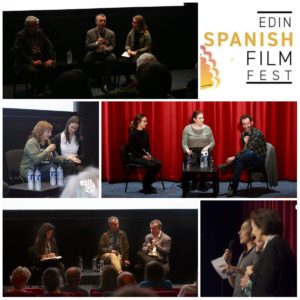 At LINCS we are very proud of the key role played by our volunteer interpreters and also of our participation as major sponsors of the festival. We are already looking forward to next year’s edition!