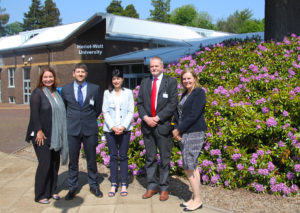 The Department of Languages & Intercultural Studies recently hosted the 2018 AGM of CIUTI (Conférence internationale permanente d’instituts universitaires de traducteurs et interprètes), the old­est and most pres­ti­gious inter­na­tional asso­ci­a­tion of uni­ver­sity insti­tutes with trans­la­tion and inter­pre­ta­tion pro­grammes in the world. Delegates attended from 49 member institutions and interpreting was provided in English, French and German. The AGM was followed by the first ever CIUTI academic conference which was centred on the theme of Translation and interpreting in an era of demographic and technological change. There were a total of 30 papers on the programme, as well as panels and a workshop. All were very well received, with the President of FIT, the International Federation of Translators, describing Heriot-Watt as a “true centre of excellence for training translators and interpreters for the future”.

The CIUTI event coincided with a visit from the Head of the Directorate General for Interpretation (SCIC) at the European Commission, Mrs Florika Fink-Hooijer, and Ms Cathy Pearson, also from SCIC. They met with staff members in LINCS and toured the excellent interpreting facilities in the Henry Prais Building. Discussions focused on possibilities for enhanced cooperation between Heriot-Watt and the European Commission; one strand of this will be Pedagogical Assistance where Cathy Pearson will return to Heriot-Watt in September to deliver interpreting classes to the new cohort of MSc interpreting students.